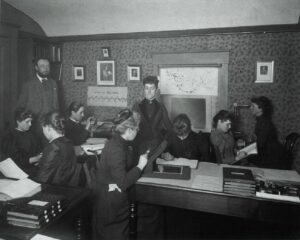 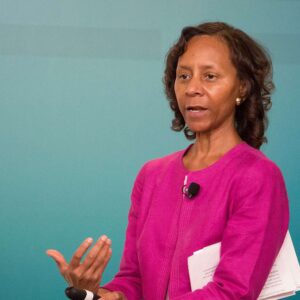 The women who cracked the secrets of the universe with computation: Williamina Fleming and the Harvard "Computers"

In the late 1800s, men at the Harvard College Observatory were busy gazing at the sky through telescopes, gathering data about the stars and the planets. But they didn’t know what to do with the raw information they were collecting.

The head of the Observatory, Edward Pickering, needed someone who was able to calculate the astronomical numbers in order to define relationships and in a sense -  measure the entire universe. Men reportedly turned down their noses at this work, considering it clerical and feminine. So Pickering asked his housekeeper, Williamina Fleming, to work as a "computer" at Harvard. Fleming agreed, and she went on on to lead a team of almost 100 women who did the computational work that's responsible for how we understand the universe today.

The woman who made Google-ing possible: Karen Spärck Jones

'Google-ing' something would never have occurred to men without her: Karen Spärck Jones

The way we find and identify information on the internet through search engines we rely on the natural language processing discoveries made by one female computer scientist, Karen Spärck Jones. She was recruited to Cambridge into the "Language Research Unit" by another female professor, the computational linguist Margaret Masterman.

Jones' most notable achievements laid the groundwork for the sort of data search and retrieval we use today. She introduced the use of thesauri into language processing, which allowed for computational recognition of words that are similar. Jones also introduced the idea and methods of "term weighing" in information retrieval, which helped search queries identify which terms were the most relevant.

The woman you have to thank for hybrid car batteries: Annie Easley

In 1955, Annie Easley began her career at was was then the National Advisory Committee for Aeronautics (NACA), as a human computer performing complex mathematical calculations. Annie Easley made the jump from "human computer" to computer programmer while working at the agency that would become NASA. Running simulations at a freaking "Reactor Lab," she was one of only four Black employees. She is well known for her work encouraging women and people of color to enter STEM fields.

Later, her work as a programmer involved energy conversion systems. She developed and implemented code used in researching energy-conversion systems, analyzing alternative power technology—including the battery technology that was used for early hybrid vehicles, as well as for the Centaur upper-stage rocket. Her contributions to the Centaur project framed the technological foundation for launching future satellites and space vehicles, including the 1997 launch of Cassini to Saturn.

The woman who made voting for American Idol possible: Marian Croak

Before Marian Croak became Google's vice president of engineering, she earned a Ph.D. from the University of Southern California in 1982, with an emphasis on social psychology and quantitative analysis. That same year, Croak joined AT&T's Bell Laboratory, where she made a sizable mark on the telecommunication landscape. She has more than 100 patents on Voice over Internet Protocol (VoIP) technologies, the process by which we transmit sound as data over the internet. Croak’s research and innovation not only made it possible for us to vote by phone for our favorite American Idol, she developed the technology that allows us to give to our favorite charities using text-to-give.

The woman who fought for Net Neutrality and Tech Diversity: Megan Smith

Megan J. Smith was the 3rd Chief Technology Officer of the United States (U.S. CTO) and Assistant to the President, serving under President Barack Obama. She was previously a vice president at Google, leading new business development at Google for nine years, was general manager of Google.org, a vice president at Google[x] and the former CEO of Planet Out. Smith conceived the idea for a tech hackathon that resulted in improved protective suits for health workers fighting the Ebola virus. She also created a White House website dedicated to women in STEM and was the chief advocate for net neutrality, coordinating key meetings that helped lead to the protection of internet freedom.

Smith is currently an advisor for Tech Job Tours, whose mission is to connect diverse tech talent with open jobs. Tech Job Tours hosts events throughout the country, which include career fairs, coding boot-camps, and speed mentoring sessions, including one-on-one connections with Smith herself.