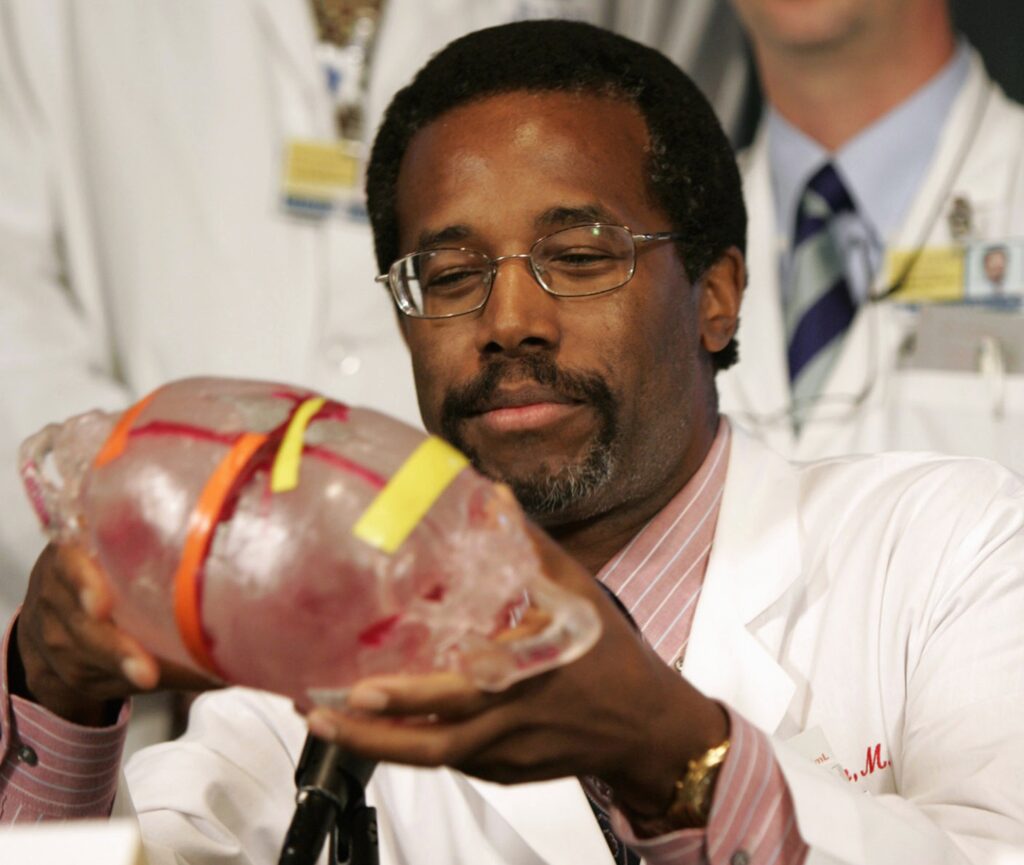 Spectacular. The word easily describes the career and mind of Benjamin Solomon Carson, the pediatric neurosurgeon whose life and talent was thrust into fame as he became the first surgeon to successfully separate twins conjoined at the skull.

Over the course of his three-decade-long career here in Baltimore, Carson’s name became synonymous for daring to take on highly controversial surgeries at the frontier of science. He was known for taking on cases rejected by other surgeons as too risky. He was involved in a total of five attempts to separate conjoined twins. His work pushed boundaries, raised questions of ethics and demonstrated the potential of science, technology, and human spirit.

On May 3, 2015, Carson announced his bid for the presidency, a day before his scheduled campaign kickoff in Detroit, Michigan. "I’m willing to be a part of the equation, and, therefore, I’m announcing my candidacy for president of the United States," Carson said in an interview with Sinclair Broadcasting.

He was already a part of history. Millions read his books and were motivated by his speeches and public appearances. So why did Dr. Carson decide to make the transition into politics and seek the nation’s highest office?

He begins by explaining he always had a plan to retire. “Well, someone had told me that neurosurgeons die early. I didn't believe it. So I wrote down the names of the last ten I knew who died, calculated the average age of death, and that was 61. So I just said, I'm going to retire when I turned 61. My intention was to do just that, to retire, to learn how to play the organ, to really improve my golf game and just enjoy the rest of my life.”

But a 2013 speech at the National Prayer Breakfast in which Dr. Carson talked about the national debt, poverty, education, and healthcare changed everything. As he continued making public appearances Carson explained, “everybody's saying you should run for president. And I thought that was the most ridiculous thing. I said, why would I do a thing like that?” Carson, true to his faith, yielded. “And I finally just said to the Lord, you know, I don't want to run for president, but if you really want me to do this you’ll have to provide all the things that I would need, like an organization and a Rolodex with all the contacts and a lot of money. I don't have that stuff. I can't do it. Next thing I knew I had an organization, we were raising more money than the RNC. We had everything that we needed. And so off we went into the political realm.”

During his campaign Carson continued his message of self-sufficiency, of overcoming, of human capacity. It didn’t always land well. When he ended his bid for President and endorsed then-candidate Trump, many Black Americans struggled to see past his conservative politics and media outlets began highlighting his supposed fall from grace. It hasn’t deterred him. He is unwavering in his commitment to what he calls a common sense approach to solving the nation’s issues.

The former HUD secretary explains the policies and models that he believes keeps families in a cycle of poverty. Consider if you’re a person “getting housing subsidies [who receives] an increase in pay. You have to report that immediately so that your rent can go up, which kind of wipes out whatever you just got. And if you bring another income producing person into your household, you have to report that. So your rent can go up, not particularly conducive to family structure and development. So obviously I've been fighting against those things and worked on expanding the family self-sufficiency program significantly.”

One of the secretary’s signature programs at HUD was the EnVision Centers. “EnVision Centers were conceived from the idea that HUD’s true measure of success is not how many individuals we can get onto our assistance programs, but how many we can lift out of government assistance and set on the path to self-sufficiency. EnVision Centers work to achieve this goal of empowering all people to fulfill their potential by providing the tools they need to succeed, all located in one centralized hub.” Carson explains the concept’s foundation is biblical, “it comes from the Bible scripture that says without a vision that people perish, and takes the resources that exist in almost every community, but are scattered all over the place and brings them under one roof and coordinates those services and adding services from 17 different federal as well as state agencies.”

True to his decades-long form Dr. Carson did not speak of the victimization of Black families, though he spoke intimately of poverty - including his own. “I grew up poor, but I don't have to hate poverty (because I did hate poverty growing up). Poverty for me and how we got to be there was temporary, I can change that. I can fix that. And I didn't hate poverty anymore, once I knew that I could change it.” He continued, “what makes you who you are? Is it your skin and your hair and the width of your nose, or is it your brain? What makes that person walking on the street who they are and what makes your neighbor, who they are? In every case the answer is the same. It's the brain. It's not those external characteristics which are exploited by those who wish to maintain power by dividing people and making people feel either guilty or like victims.”

Carson acknowledges there are millions of people who disagree with his politics and think his policy recommendations offend his race, history and community. He is stalwart in his response. “Our Judeo-Christian foundations tells us how to relate to our fellow man, with love not with cancelling if you disagree with him. We have another foundational principle - liberty, the ability to lead your life, the way you want to live it without having a bunch of people telling you what you must do and how you must do it and when you must do it. That's why so many people came to this country from other places -  to escape from that. The last thing we need to do is reinstitute it. There are people who just feel differently about what this country should be doing. They feel that the government should be given our power and that they should control everybody's life from cradle to grave. [They believe] that will keep us from having pockets of disadvantaged and poor people. But it never works, but you always run out of money.”

Instead, Carson insists the concept of community is what made our society strong. “You know, if a farmer broke his leg during harvest time, everybody else just harvested his crops and made sure his family was okay. That was just the American way. There are a lot of people who are like that today, but unfortunately we've reached the point now where we've allowed politicians and many in the media to convince us that the person who lives across the street is our enemy because they have a sign in their yard that’s different than the sign in mine.”

“It’s that kind of divisiveness that is really hurting us as a nation, hurting our unity, hurting our strength. And there's a whole lot more that unites us than divides us, but the exploiters come in and make the things that divide us into the most important things.” This is what Dr. Carson says he’s trying to combat through his organization, The American Cornerstone Institute, which states as a part of its mission to “be a voice for reason and civility in a nation that is increasingly devoid of common sense.”