Brian Burnett is an archetypal Black Wall Street entrepreneur—someone with humble beginnings, an artisan’s skillset, and business acumen. Born and bred in Southeast Raleigh, Burnett was raised by his mother and lived in Washington Heights and then Halifax Court.

“[Growing] up in public housing, you find the ways to get things without having to have a lot of resources,” said Burnett. “That’s one of my superpowers.”

After graduating from Enloe High School, Burnett decided not to go straight to college and get a job. While working in food service, he was spotted by a recruiter from Nordstrom. Working at the department store exposed Burnett to the world of high-end men’s fashion.

“It’s there that I fell in love with tailoring and bespoke menswear,” Burnett explained, “especially European fashion and European tailoring.”  That love was deepened during a trip to Europe after graduating from UNC Chapel Hill in 2013 with a degree in Communications.

“It really gave me a global perspective on customer experience,” he said. “And I noticed how tailoring and alterations was more of a personalized, and consultative approach in Europe. Specifically in London, and Amsterdam in the Netherlands.”

After Burnett returned to the States, he spent some time in the technology industry before opening Glenwood South Tailoring House in the fall of 2015. But it was soon after setting up shop in his new rented storefront that Burnett realized that this is only part of what he wanted to accomplish as a businessman.

“After a year I realized that I still don’t have control,” he said. “I decided I had to get into real estate if I wanted to shape my own future.” 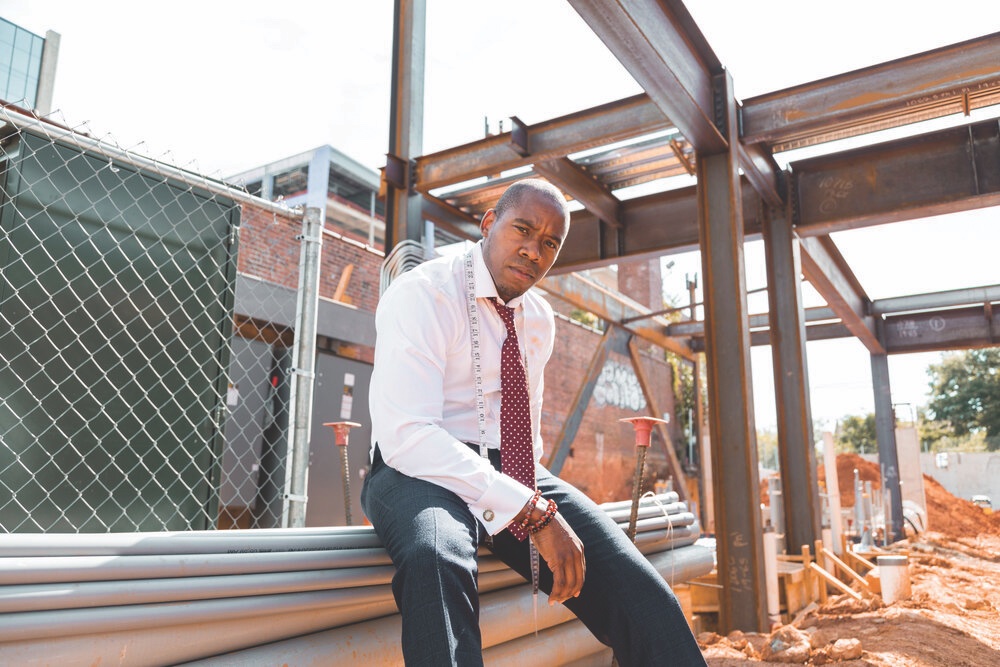 Burnett had been passionate about real estate for some time, but it was in 2018 that he finally decided to take the leap and buy his first commercial property. He explained, “I knew I was destined to be in real estate because it’s something that I would research and look at and study, and it will be leisure.”

After sending out five letters of intent, three returned Burnett’s call, and one Rocky Mount seller accepted his terms. With a goal of owning a commercial property and land by the end of 2019, he had accomplished this by May. Burnett Development was in full swing and, by the end of 2020, his year-old company held nine properties.

For Burnett, the most important aspect of real estate development is building something that can be passed on to the next generation—both the tangible assets and the intangible life lessons. One of his goals is to create a program that educates young people on the real estate industry and helps them invest in their own properties.

“Our goal at Burnett Development is to actually teach real estate to young people,” he explained. “I would love to, you know, create partnerships for young kids in grade school to create a real estate portfolio for themselves. That way they don’t have to worry about student loan debt, because them and five of their buddies own a property together under their parents’ guidance.” Burnett believes that the program would prepare young Black and brown people for the business world financially and mentally.

Within the world of small business, Burnett also wants to help emerging entrepreneurs build more sustainable enterprises through owning their own storefronts.

“When you own the shell, you are highly incentivized to make it work. As your business starts to grow. You’re not just doing revenue, you’re actually growing your wealth, your sustainable economy. So that way you’re not getting [crushed] when the landlord decides to sell the building and the new one raises the rent by 20 percent.” This, according to Burnett, is what will position Black and Brown entrepreneurs to begin scaling their businesses and getting in front of fresh eyes.

The fire that Burnett has for seeing himself and others take their talents and turn them into profitable businesses and generational wealth is contagious. Much of that comes from both the blessings of being raised by his grandmother and having a father who helped him understand the world he lived in; those things that they could not provide for him also inspires him to provide a better financial foundation for his children.

The greatest lesson for young people that Burnett has is that they do not have to choose between their passion and financial security—owning real estate is the key to succeeding at both.